How One Millennial Afforded to Visit Grandma for Thanksgiving

As lore has it, the Wednesday before Thanksgiving is the busiest travel day of the year (even though technically USA Today debunked that). As a college student or even a recent college grad, we don't have the time or money to leave when we want on the most luxurious modes of transportation. Instead, we're usually stuck negotiating with coworkers so they'll take our shifts the day before Thanksgiving so we can see grandma for the first time in a few years while promising our bosses we will be back for our 5PM shift on Black Friday. Beggars can't be choosers. 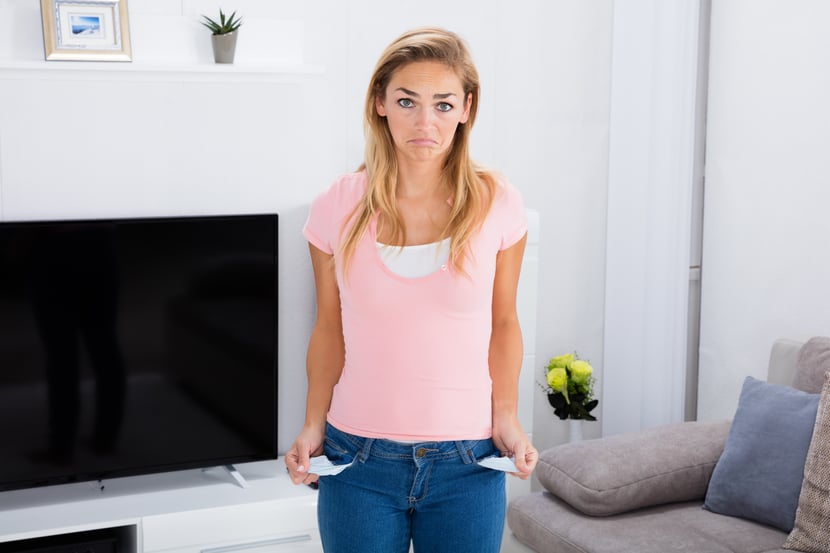 How most millennials feel half the time.

Shortly after graduating college, I was hired as a barely-above-minimum-wage barista at a local gelato shop. It wasn't enough to cover my bills, but it was enough to promise my grandparents who lived an 8 hour drive north that I would visit them for Thanksgiving.

My first choice was to hop on Expedia and look up flights. Even with tips, I wasn't making nearly enough to afford a flight from Philadelphia to Manchester. Even their "bargain" fare was over $200. That's a lot of money to spend on a flight that's hardly an hour long.

My next choice was by train. In college, I had a boyfriend that lived in Burlington, VT. One year for New Years I took an 11 hour train ride from Philadelphia. It was excruciating but saved me money. Honestly, an 11 hour train ride is not for the faint of heart. Your body hurts, you get headaches, and if you don't pack properly you will be VERY hungry. I remember crying the first time I did it.

Still, I didn't care, I would tough through an uncomfortable train ride to save some money. Unfortunately, the ride from Philadelphia to Concord was just as expensive. No thank you! Time to check out my last choice.

Greyhounds and buses in general have a bad stigma in my opinion. Personally, these types of buses make me think of Jon Voight as Joe Buck in Midnight Cowboy. Still, I had promised I would visit my grandparents and I didn't have a car. Plus, the tickets were only $120 round trip. Far less than the plane or train. The only downside? I would have two transfers.

The amount of tickets that I had to print out (six) at the bus station was mildly embarrassing. Personally, my memory is crap. This leads to a constant paranoia that I am forgetting something, which led me to counting those six tickets over and over throughout my trip. The trip was already getting off to a lukewarm start.

My first transfer was in New York City. At first, I was pretty excited. I would be able to spend an hour in NYC exploring. It was my first time there alone as an adult. Little did I know, Penn Station is smack dab in the middle of Times Square. Ergo, all I had to "explore" was the tourist-ridden over-priced shops while being constantly barraged with neon signs. Oh and I had to lug my heavy bags with me everywhere. By the time I caught my next bus my feet hurt and I was feeling disheartened. 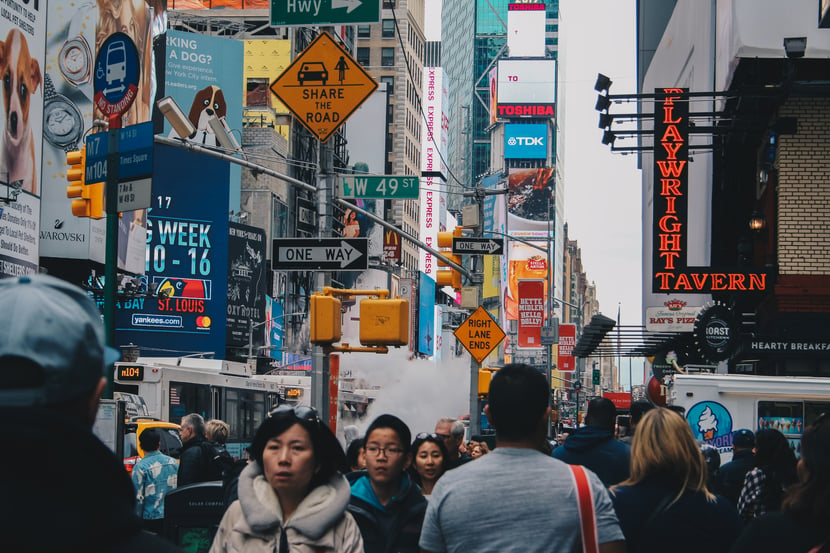 Real-life depiction of my personal hell.

The next few hours weren't too memorable. I had my section all to myself, so I could spread across two seats and nap. Naturally I had my bag's handles wrapped around my legs to prevent any theft while I slept. Living in Philadelphia for 4 years makes you hyper-aware of that stuff.

By the time I arrived at Worcester, Mass. it was dark and I needed coffee. I needed that boost so I wouldn't cranky when I got on my final bus and finally arrived in Concord. Unfortunately for me, the local Dunkin' Donuts was closed. You know what else closed? The bus station.

That's right. The bus from NYC had arrived late and we had missed the last bus from Worcester to Concord. The cherry on top? The bus station was closing too. This left the rest of us standing in the freezing cold waiting for the last bus to Boston, where we could then transfer to a bus to Concord.

It was miserable, especially since across the street was a Dunkin' locked up for the night just taunting me. I promised myself, despite my recent bout of vegetarianism, that once I arrived in Boston I was buying myself not only coffee, but a Big Mac as well.

Now, the bus from Boston to Concord was not through Greyhound, but through public transportation. This led me to feeling uneasy that they would make me pay for another ticket instead of verifying the ticket I already had. After wolfing down a Big Mac and fries, I chased down multiple employees to make sure my ticket would work. Maybe I seemed crazy and irate, but it was nearly 10 PM and I had been on the road since 11 AM and I just wanted to be at my grandparents' house.

Eventually the bus arrived, I was allowed on like multiple people had promised me, and I was on my final stretch to Concord. I think the best part of arriving was that my grandfather didn't recognize me at first because I hadn't seen him so long.

Thanksgiving was worth all the stress that came with my greyhound bus ride. I was able to see family that I hadn't seen in a while, and enjoy a delicious meal. My ride home wasn't nearly eventful, and when I arrived for another hour layover in NYC, I opted for sitting at a bar and sipping on an extremely overpriced beer.

My sister, cousins, and I back in the 90's at a family gathering. I'm the cute one on the right.

So, as a millennial what is the best option to visit family?

That is, as long as your destination is < 8 hours away. If you need to go cross country and you have the means, splurge on that plane ticket. It's the fastest, most convenient way.

When looking for flights, instead of using Expedia or Kayak, go for Google Flights. It has all the special options that a travel agent has behind their magic computers. Plus, you can look at a calendar of dates and to see if changing your travel dates will save you money.

If you are brave and have nerves of steel, 100% go for the train or bus. Just know that taking a train/bus is a lot like backpacking in the sense that once you start you can't really quit. If you do quit, you will probably end up stranded and spending way too much money on a Lyft (or a cab if they don't have Lyft in the area).

So how do you survive an uncomfortable train and/or bus ride?

Make sure you have plenty of your favorite comfort snacks and drinks. No alcohol though, you don't want to end up being drunk and getting lost mid layover, or getting a dehydration headache.

Speaking of headaches, bring a bottle of those liquid aspirin pills along with you. I suggest the liquid ones because although they can be a splurge, they kick in much faster. Make sure you take, like, three before you even get on the vehicle for prevention. Not to sound like a mom, but take them every few hours or as needed. It will save you a lot of pain and suffering in the long room.

For further comfort, don't dress for fashion. Wear your comfiest sweatpants and sweatshirt. Put on fluffy socks, and if you're really feeling it, slippers as well. You're not traveling for business, you're traveling for family. Grandma shouldn't care if you hop of the bus in your pajamas.

Maximizing your comfort will help negate the extreme discomfort you have going for you. Long distances on trains and buses are terrible. There's no getting around it. But the money you saved and you're aunt's famous dinner rolls will be worth it, I promise. 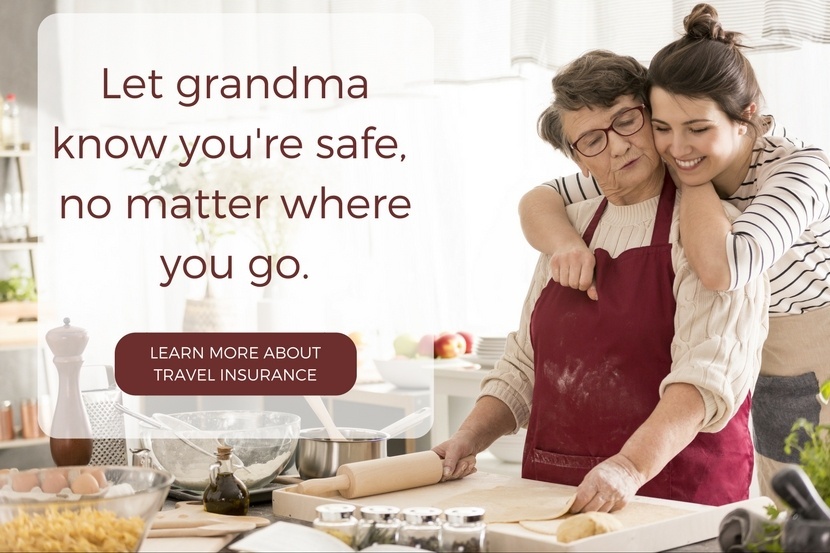