Eating on the Edge: Foods That Are Life-Threatening

One of the best things about being a human on this earth is all the food that is out there to try. Cheese and wine from France, scrumptious soups from Thailand, Italian pasta, and Spanish rice from the Caribbean. That's just a tiny sample of what this planet has to offer.

Some destinations, however, have delicacies that err on the side of danger. These foods, if not prepared correctly, can kill you right on the spot. We've compiled a list of these foods, so that even the most dangerous of the crew can decide to just maybe sit this one out.

These cute little buddies (called fugu) are are considered a delicacy in Japan, but that doesn't mean you can eat it just anywhere. Chefs must go through extensive training in order to be able to serve it. Improper preparation can lead to the diner retaining consciousness while becoming paralyzed and finally succumbing to asphyxia. Oh, and there's no antidote.

In African countries like Nambia, it's customary to eat entire bullfrogs. Yes, you read that right. The thing is, underdeveloped bullfrogs that haven't become to mate yet are quite poisonous. They contain toxins that can lead to kidney failure. In case you haven't heard, kidney failure is NOT fun.

A post shared by CristinaFerreiraCP (@cristinaferreiracp) on Feb 3, 2018 at 8:34am PST

With a name that phonetically reminds us of the word "yucky", it can't come as much of a surprise that it can kill you. Ackee is a cool Jamaican fruit that is actually quite tasty. Its seeds, however, are deadly. They contain a toxin called hypoglycin, which can cause the Jamaican vomiting sickness. This aptly named sickness causes, you guessed it, vomiting and death.

Sannakji is a form of raw, live, long-arm octopus. Yes, you read that right, LIVE octopus. As in still squirming on your plate. This South Korean dish is by no means poisonous, but still causes many deaths every year. Why's that? Because the octopus' suction cups are still functioning. This means that if you don't properly chew these babies, they're going to suction on to your throat and make you choke to death. Sounds like fun.

These cute little guys are quite tasty, but at what cost? Because of their danger, it's illegal to import them. The redness that they're named after is from a high level of hemoglobin (the stuff that transports oxygen in blood cells). If infected and not properly cooked, consumers can contract diseases such as Hepatitis A, E, typhoid, and dysentary. Not so cute anymore.

This traditional Sardinian cheese takes the already moldy process of creating cheese too far. During the process they leave it uncovered allowing flies to lay their eggs in the cheese. Maggots then become an integral part of the fermenting process. The cheese is meant to be eaten while the maggots are still alive. If they have stopped wiggling, then the cheese is too decayed to be safely eaten by humans. The thing is, eating live maggots is dangerous too. If still alive, they can bore into the wall of your stomach. That, and these maggots can jump as high as 6 inches. So if you're going to partake in this aphrodisiac, wear some goggles. Now that's hot.

When trying this South American treat, make sure it's cooked. Raw cassava contains none other than cyanide. Of course even if it is cooked, if you eat too much or improperly prepare it, you'll probably end up with cyanide poisoning anyways.

Monkeys are plentiful in Southeast Asia, so it should be no surprise that they're eaten there too. One of the more popular parts of a monkey to eat is its brain. You read that right, brain! Its eaten boiled, fried, grilled, and raw. Yummy, right? The thing is, eating it can lead to one contracting Creutzfeldt-Jakob disease. Think of it as Mad Cow disease for primates. As it can be contracted through neural tissue, and that's exactly what's being eaten, it's pretty difficult to avoid. This neural disease can cause dementia, impaired vision, depression, and eventually death.

If you've ever been hiking on the East Coast of the USA, you've probably seen elderberries innocently growing on the side of the trail. Of course, these deep purple berries widely enjoyed in the US and Europe, but also dangerous to consume. Like cassava, eating raw elderberries can lead to terrible terrible diarrhea as well as seizures. That's not even the worst of it. Consuming the leaves, twigs, and seeds will give you cyanide poisoning. So, if you happen to run out of trail mix and are looking for a snack from nature, please avoid these.

A delicacy to some countries around the Indian Ocean, the Silver Stripe Blaasop seems innocent enough. Of course, if it were innocent, it wouldn't be on this list. The liver, reproductive organs, and even skin contain toxins that can lead to fatal muscle paralysis and breathing and circulation problems. Yummy!

If you like taking risks and want to try these worldly delicacies, please be safe. Make sure the cook is properly trained, and that locals are also eating there. Some things are worth dying over, but we're pretty sure that list doesn't include maggot cheese. 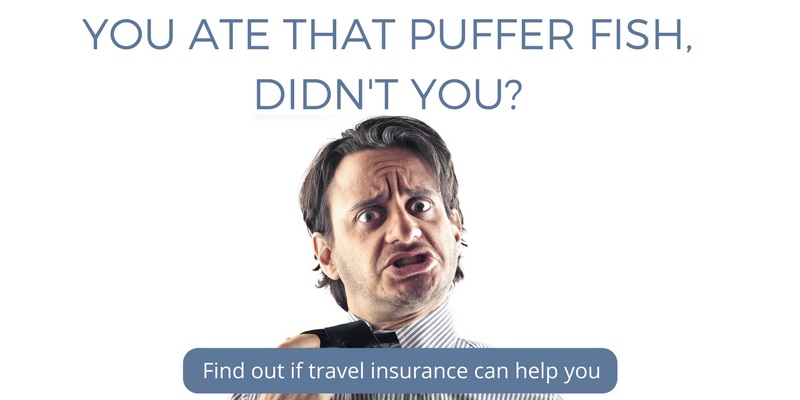